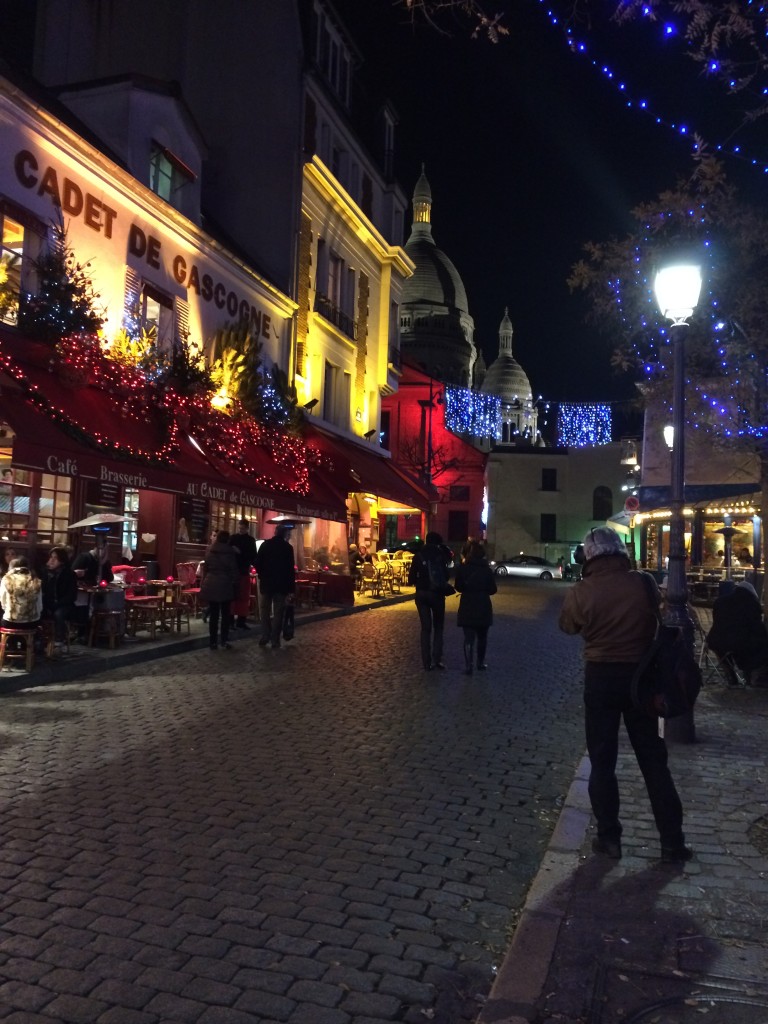 Montmartre is my most favourite area of Paris and on my last visit in winter I stayed there for a wonderful ten days. I may be a romantic but to me Montmartre seems to capture the “old” Paris, the Paris where you could easily imagine sitting in a cafe and at the next table is Hemmingway scribbling on papers or a glance out the window and there is Monet, Dali and Picasso working away at their easels. If you are anything like me, then you will find much enjoyment just casually walking through the cobblestone streets of Montmartre, admiring the old buildings, wandering up stairs and capturing glimpses of the magnificent Paris below.

Montmartre has always been somewhat of an area where the bohemian’s of old gathered – attracting artists, writers and philosophers.  During the 19th century Montmartre quickly became a popular drinking area due to the fact that the local nuns made wine!  The area then became known for its decadent entertainment and the extravagant shows at the Moulin Rouge and Le Chat Noir, which soon became the place to be for anyone who was well … anyone!

The Bohemians may be all but gone but the area still has a charming village feel that is best explored over many days. Don’t do yourself an injustice by following the tourist trail to the top of the hill, where upon you take the obligatory selfie, dodge getting your portrait sketched or conned into buying Eiffel tower keyrings from the street vendors … heaven forbid do not ask them what the string is for or you will end up with a new accessory within seconds! Montmartre is much more than this and what it requires is a little time to explore.

So start your journey at the bottom of the hill, get a couple of photos of the Moulin Rouge and then start walking up the hill and then things will start to change. The streets become cobblestone and you enter a world of a quaint village like atmosphere. Allow yourself plenty of time to wander about the streets, in and out shops, boutique little art galleries, cafes, take in the view from the top and the resident artist community that sets up each day at the Place du Tertre.

What to see and do

Located at the very top of the hill and the highest point in Paris is the Sacre-Coeur Basilica.  It’s open early until late and is free to enter. The views from the steps are magnificent, overlooking the gardens and Paris below.  In front of the steps is a viewing terrace which gets jam packed with tourists in summer.  In winter it’s a little quieter and from late November there is a lovely little Christmas market at the foot of the Basilica.

A great little square where there are a number of restaurants, tourist shops and where the artist colony set up their easels – like an open air art gallery.  In summer the Place du Tertre is extremely busy with tourists and the centre square replaces the artists easels with alfresco eateries.  The artists will roam around or set up their easels around the perimeter during summer but there are not as many of the displays as there are in winter. The restaurants here really cater for the tourist, so if you wish to find good quality food then you will need to wander away from this main square. Having said that the atmosphere here is fabulous and sitting in a restaurant in summer with beautiful French singers serenading your table is an experience not to miss out on.  If it is fine dining you are after there are some amazing places to eat throughout Montmartre and they might take a little research to find!

The wall of love

The wall of love is very popular with tourists and is located right near the Rue Abbesses metro stop.  I love you is written over and over again in many different languages – try to find it in your language.

Rue Norvins – the man who walks through walls

The statue, sculpted by the famous French actor Jean Marais, was produced to commemorate the most famous story of author Marcel Aymé, “Le Paisse-Muraille” or “The Man Who Could Walk Through Walls.”

Located on the corner of the Rue Girardon and rue de l’Abreuvoir is Place Dalida. The statue was erected in honour of the singer and actress who was discovered in Montmarte in 1962.

The station’s entrance, designed by Hector Guimard is one of only two original glass covered Guimard entrances, called édicules, left in Paris. Rue Abbesses itself is a lively area with lot’s of shops and restaurants.

Nestled amongst the cobblestone streets on a steep hill is is the only remaining working vineyard in Paris.  Sitting on a 1600 m2 block is Clos Montmartre, the wines are not produced for sales to the public but are harvested each year and auctioned off with the proceeds going to charity.

There are lot’s of photo opportunities in Montmartre from the view at the top, views between buildings looking down on Paris, cobblestone streets, romantic stairs, old Parisian street lamps, colourful old restaurants and cabarets with windmills (there are a few) and the street scenes of Rue Abbesses and other surrounding streets as you head up the hill.

Excellent French food, a casual bar atmosphere with above average French food that is value for money.  Staff are so friendly they will make you feel like a local.  We loved this place so much we went back quite a few times.  They also have a bar area which is nice to just stop by for a cocktail.

Something special! Fine quality food, wonderful knowledgeable staff, a little on the pricey side but worth it.

Beautiful gourmet Italian food can be found in this quiet and intimate restaurant. The venue has nice surrounds but does lack a little atmosphere due to the husband and wife team treating it all as a serious business but friendly and polite. They don’t work late as we tried to get in one night around 9 pm and they told us to come back tomorrow night earlier.  Don’t be put off by the closed curtains out the front just drop inside and inquire if  they have any free tables, the food really is amazing and after all that is what you go for.

For the sweet tooth, chocolatier Arnaud Laher has decadent sweets, I always make a trip to this place to get my cake and macaron fix in Montmartre.

If you are looking for somewhere for breakfast then this place is the place in Montmartre.  Good value for money and lovely service. The waiters there were ever so charming, even early morning! Making a fuss over the ladies, the waiter always said to my sixteen year old son that ladies are always first.

A casual restaurant by day but bar by night. Filled with lot’s of tourists and locals on Friday and Saturday nights, it’s friendly and unpretentious.   There is a band for entertainment and in between sets current chart music is pumping through the venue, plenty of dancing in the back room and a great atmosphere.

Now I am not one who frequents nightclubs but I went here with my eighteen year old daughter who is big on the club scene and we both enjoyed this place. The waiters at Bistrot de Martys recommended here and we met up with them after they finished work at this club.  Music is Dj remixes and current chart music.  I didn’t feel out of place here being older than the twenty-somethings who frequent this place, quite a few different age groups but predominantly the younger set. The area felt quite safe at night to walk as we didn’t get back to our accommodation until 4am on foot.

The movie Amelie was filmed in Montmartre as were parts of the film La Evian Rose based on Edith Piaf’s early life busking in the streets of Montmartre.

Au Cliron des Chausseurs at the Place du Tertre was a hangout of Ernest Hemmingway’s, it still exists, maybe the decor has changed but you can still gaze out the same window, perhaps sit at the same table and look out to the artists painting away. 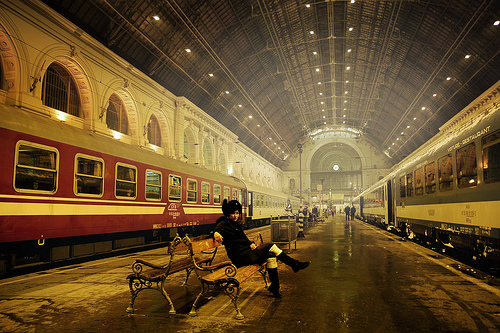