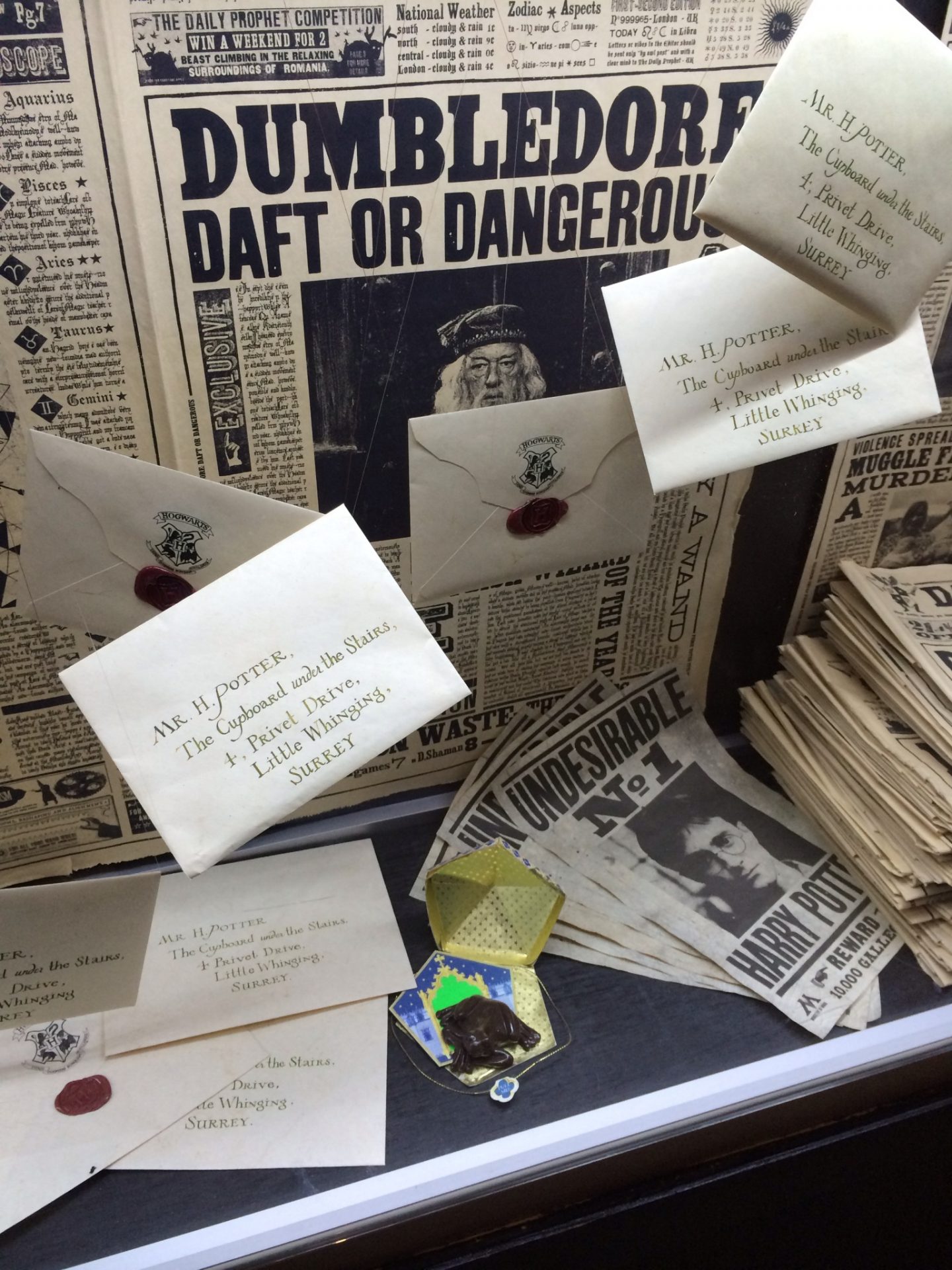 The Harry Potter Tour at Warner Bros Studio is a must for any Harry Potter fan visiting the UK. In fact you don’t even have to be a die hard Potter fan to enjoy the tour. When we (myself and my two teenaged kids) visited London last winter, right on top of the bucket list was to do the Harry Potter Studio Tour. My kids grew up with the Harry Potter books and they eagerly awaited when each movie was to be released. I was pretty much the same! Ever since Hagrid uttered those words “you’re a wizard Harry” in the first movie we all became obsessed Potter fans. Here is a recount of our visit to the making of Harry Potter at Warner Bros studio in London.

The Tour – Studio one

The tour begins once you step inside the foyer. Firstly, you will spot the Ford Anglia hanging from the roof that was used by Harry and Ron to get to Hogwarts in the second movie – the Chamber of Secrets. Posters of the cast line the walls and then as you are ushered into the queue you will pass by the famous bedroom under the stairs. Whilst you are standing in the queue the quick witted usher will entertain the group. He had a knack of finding out all about you and then the one liners began. He kept the crowd thoroughly entertained. Once the group becomes large enough, you will then be able to enter through the big doors and officially begin the tour. I visited in December, so it was a quieter time and there wasn’t as many people queuing up.

Once you have come through the doors, you will find yourself in a darkened room. It’s quite a strange feeling being in a dark room with a bunch of complete strangers!  Then the video screens come on and you can see again. The guide then gives you a little run down of the studio tour. From there you enter through another set of doors, where you will be seated in a theatre to watch a documentary on the making of the Harry Potter films. The videos were quite fascinating as they covered all sorts of topics. There were interviews with actors, the directors, J.K. Rolling herself and the rise in popularity from book to movie. Once this finishes you will then be escorted to the Great Hall. Stopping in front of the doors, you can’t help but wonder what it will be like on the other side. Everyone was eagerly awaiting for those doors to be opened. Once on the other side, you will see the very same set that appeared in all the movies. The long tables are set with festive feasts and during my visit it was decorated for christmas. There are headless mannequins dressed in the various clothes worn by the cast. At the top of the room is the teachers table with full size replicas of the Professors Dumbledore, Hagrid, Snape, Mcgnagall and Moody. I will admit, it was pretty cool to be standing in the actual room that you have only seen in the movies. Once you have left the great hall, you will find yourself in an expansive room, which has you winding past various sets, props and memorabilia from each movie. There is Hagrids Hut, the Potion room, Dumbledores office and the fabulous Dolores Umbridges pink office amongst many more. Most of these can only be admired from afar, as you can’t enter the rooms. Everywhere you look you will find something that will have you thinking back to which movie that belongs too. There is an incredible amount to see here – including the paintings that decorated the walls of Hogwarts, the Hogwarts gates, the Mirror of Erised, cabinets containing the Philosopher’s stone, the Goblet of fire, Horcruxes, the interactive Marauders Map and this is just for starters. Every item that was ever used on the Harry Potter set can be found here. The halfway mark takes you outdoors to the backlot. Here you will find the Nightrider bus, the Ford Anglia, No. 4 Privet Drive, the Gravesite of the Riddle family, the Chess pieces, the Walk bridge and the Potters house in Godrics Hollow. These all offer great photo opportunities as you wander about outside.

If you are feeling peckish on the tour, then it’s here where you will find a small eatery and if you have ever wanted to try some of that famous butter beer, then this is your opportunity. Once you have refuelled and have got some photos, it’s time to move on to the second indoor area. Out the front of No. 4 Privet Drive owned by Harry’s Aunt and Uncle – the Dursley’s. Studio two is where you will get right into the nitty gritty of the making of Harry Potter. Here you enter a world of life size character models, the creature shop, a massive Aragog hanging from the ceiling, buckbeat, owls and various other interactive creatures. This area is quite informative and there are many videos at each display explaining the process of getting these characters to life. After leaving this section, you will walk around a corner and then find yourself in the dimly lit Diagon Alley.  All the shops from the movies are there – Wiseacres Wizarding Equipment, Wesley’s Wizarding Wheezes, Madam Mathins amongst others. Unfortunately you cannot enter the shops, so you will have to settle for a few photos from the outside. Towards the end of the tour you will get to see an incredible large 1:24 scale model of Hogwarts. The model really is quite an impressive site. The set up of the room allows you view it from all sides, including above. Definitely a highlight of the tour. Finally the tour concludes with an impressive wand shop. There are over 4000 wands stacked from floor to ceiling, with each wand representing the many people who worked on the films.

Once you leave this room you enter the gift shop. You can easily spend quite a lot of time in here too, the space is very large and there are so many items to souvenir. In the hands of many kids was the most popular item being sold – a replica of Harry Potter’s wand. You can purchase any of the other characters wands too, along with sorting hats, chocolates, lollies, key chains, clothing the list just goes on. Some items are inexpensive, others were aimed at collectors that could fetch a fair price. Along the way there is an interactive room where you can get some photos of yourself riding broomsticks and driving the Ford Anglia. I don’t normally buy these sorts of photos but this was a little different as it was part of the experience. We got a laugh out of each other being filmed. The Warner Bros Studios recently expanded in March, 2015 with the edition of the Platform 9 & 3/4, which allows visitors to board the original Hogwarts Express used in the movies. 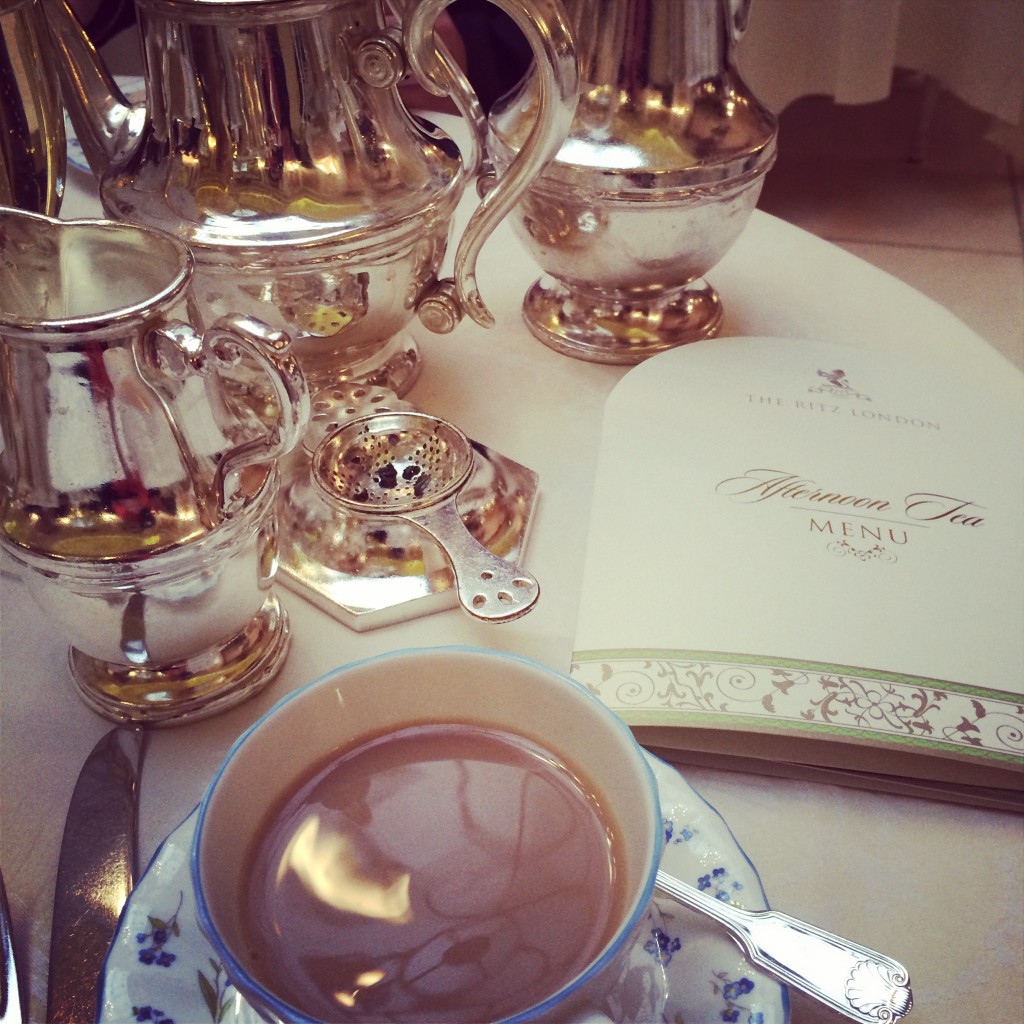