Let’s face it there are a gazillion lists out there about travel and particularly so for the Millenials. Cities you must travel to in your 20s, places you must see before you turn 30, those epic backpacking adventures for 20 somethings. Now what if you are about to turn 40 or even 50 and you haven’t been to any of these places. Does this mean that somehow your life has been short-changed or that you’ve missed the boat (terrible pun I know) on travel?

Of course not, travel is for all ages, with the only difference being that each generation may have a different perspective on what defines a great travel adventure.

So if you are about to celebrate a milestone, why not jump on a plane and make it a birthday to remember. After all – life really doesn’t get started until you are 40!  Here are 15 places to travel to when you turn 40.

The land of wine and cheese beckons and France has some truly spectacular wine regions. Must visits are the Burgundy region for the red lovers, for a romantic setting there are the many vineyards of the Alsace region, for a picturesque setting grab your bicycle and explore the Provence and the Rhone Valley wine region. If you really want to do it in style then head straight to the Champagne region and celebrate with a tinkle of Veuve Clicquot, Moet Chandon or maybe some Dom Perignon – in fact why not just go with all three.

With quaint little medieval villages perched on hilltops, picture perfect scenery and good rustic Italian food, what’s not to love about Tuscany? Stealing a week or two in your own villa will have you effortlessly blending into local life. Fancy yourself as an Italian cook? Then here is your perfect opportunity to harness the Italian within with cooking classes offered through out the region. Yes, Tuscany is calling you and there is a glass of red with your name on it, and a chair set aside for dinner with your new neighbours. All this on a balmy sunny evening overlooking the valleys below.

Remember Shirley Valentine? No? You may possibly be under 30 then. Shirley leaves her stodgy England life, for a life changing holiday in the Greek Islands. With it’s impossibly beautiful white washed villages, the stunning caldera and magic sunsets, you may feel that you have arrived in paradise. The two most popular islands are Mykonos and Santorini. Mykonos is an island with lot’s to keep you entertained, food, parties, bars and great nightlife. Santorini is a little quieter on the nightlife front but is more about breathtaking scenery, sunsets and romance. The Greek Islands are a little slice of paradise that will have you never wanting to leave. Find out more on Santorini here.

This legendary lost city is an incredible sight for those who come to view the treasury, temples and monuments. Petra is an ancient city that can be accessed through a narrow gorge and had been forgotten for centuries by the Western world, until it’s re-discovery in 1812. Petra lies in the Wadi Musa (Valley of Moses) and was a bustling city between 400 BC and 106 AD when it became deserted. They say that when you first catch sight of the treasury, it is so spectacular it will just take your breath away. If ever you wanted to experience a discovery of ancient ruins then the pilgrimage to Petra is an absolute must.

Don’t miss visiting Cappadocia whilst you are in Turkey. Cappadocia has a stunning landscape which is made up of volcanic rock formations known as fairy chimneys. At various points in time the rocks were inhabited with castles, houses and even contained entire cities. This former way of life can still be seen today with many dwellings and hotels built around this ancient area. The best way to Cappadocia is to take a hot air balloon ride at sunrise, sipping some champagne and marvelling at such an incredible sight below. Find out what it’s like to take a Cappadocia balloon ride here.

Step into the world of the rich and famous. With a backdrop of spectacular cliffs, a beautiful harbour with oversized yachts, mansions and of course the champagne will be flowing. Here’s your chance to rub shoulders with the stars. Monte Carlo’s two biggest draw cards are the Grand Prix and the Casino de Monte Carlo (which is one of five in Monaco). Here’s the thing, you don’t have to be a millionaire or mortgage your house to visit Monte Carlo as there are plenty of free things to see and do around the city. If you are a car buff then a simple stroll around the city will have you spying a Lamborghini around every corner. If you love old world architecture then you are in for a treat, with many buildings showing off beautifully ornate interiors. If you love an excuse to dress up to the nines then Monte Carlo is your city. The beautiful city of Hoi An in Vietnam is an old spice trading town that retains much of it’s heritage buildings and thus is a UNESCO world heritage site. Built along the Thu Bon River, Hoi An exudes a romantic setting, where grand old French trader houses built in the 16th century are now restaurants and hotels. With influences from China and Japan, you will find many architectural styles and monuments. Hoi An also has great shopping, markets, beach resorts and for the golfer there is no less than three world class golf clubs, designed by Greg Norman, Colin Montgomerie and Nick Faldo. If you are a fan of the 90’s series China Beach’ then this very beach is located between Hoi An and Denang.

A visit to Mostar is fast becoming the must do item on everyones bucket list. In the heart of this city is the stone arch bridge that sits proudly over the river Neretva. Originally commissioned in 1566 by the emperor Suleiman “the magnificent” and had stood for almost 400 years. The original bridge (Stari Most) was destroyed during the civil war in the 1990s but was restored in 2004 with sponsorship of UNESCO. Mostar itself is a pretty little village with narrow lane ways and cobblestone streets, venture on a bit and you will also notice reminders of the war with bullet holes in some of the buildings. Restaurants and cafes line the river giving you a great view of the bridge. A popular tourist attraction is the jumps made from the bridge by the local lads into the river below. These jumps are usually only attempted by the locals but for a fee, you too can throw caution to the wind and make a jump. Of course you will be required to do some training before you attempt the jump to ensure your safety. Or maybe just sit back in a cafe and watch others put on a show for you instead.

Fancy a picnic by the lake? Well this place is the ultimate picnic spot. A beautiful, perhaps even a magical place, where you will want to pinch yourself to ensure you are really there.  Dominated by the background of snowcapped mountains and a gorgeous lake with a medieval church floating in the middle . There is lot’s to do in and around Lake Bled from rowing boats, cycling, hiking and visiting the castle high on the cliff that overlooks the lake.

Positano on the Amalfi Coast is simply just heaven on earth. A spectacular village that is built directly into the cliff face that cascades down to the ocean. Positano has arguably the most stunning sea views of all of Italy. Those who come to Positano come to relax, eat and drink and of course for that picturesque view. Indulge in beautiful seafood, venture up to the champagne bar high on the hill and watch the sunset over the sea. Lazy days can be spent doing very little, laying around the beach, reading a book and a frolic in the warm sea. Croatia steals the limelight all to often but here is a secret – Montenegro also enjoys the same coast line. To escape mass tourism of other beach towns, head straight to the Bay of Kotor. Kotor is an area that is around 2000 years old and there is plenty of reminders that this is so. The scenery is breathtaking, the village has old medieval buildings and cobblestone streets and the dramatic fjord – as many call it. Further along from Kotor you will find the equally quaint little villages of Perast and Tivat which are well worth visiting when exploring the Bay of Kotor.

Everyone should visit New York at least once in their lifetime. It’s true that this city never sleeps. The atmosphere of New York is exciting and no matter what time of day or night it is, there is always something happening. The options in this city are endless, from hanging out in times square, a picnic in central Park to heading to the Four Seasons hotel to have a martini – shaken not stirred. Then there is the view from the ‘top of the rock’ that spectacularly yet also simply says you are finally here – you are in NYC.

The birthplace of Mozart Amadeus and where one can’t help but sing out loud ‘the hills are alive …’ thanks to a little movie called The Sound of Music. Those hills are the stunning Salzburg Alps and they are ever present in the background of the city of Salzburg. One of the most popular cities in Europe, receiving more visitors than Venice and Florence, this city is full of that similar old world charm of the aforementioned. Strolling about the old town, you will come across a palace with beautiful manicured gardens, a fortress and many baroque style buildings. Salzburg has over 4000 cultural events each year – from concerts in the Fortress to beer festivals, you will be guaranteed that something will be happening whilst you are visiting.

Legend has it that Seville was founded over 3000 years ago by the Greek god Hercules and is home to the colourful Feria de Abril festival. This festival (held in April) is Seville’s biggest party. The locals go all out and the girls can be seen dressed in fabulous full flamenco outfits during the week long festival. A cultural event that is for the locals rather than tourists, giving it an authenticity to an event that’s not to be missed, even as a spectator. Seville is not only know for it’s flamenco festival but for it’s tapas bars, oranges, it’s old town of cobblestone streets and it’s magnificent Alcazar Palace.

One thing that must be done when visiting Cambodia is to see the incredible sunrise over the Angkor Wat temple. Ankgor Wat is also the largest religious structure in the world and was built by hand. Tourists have been flocking to witness this site since it was made famous by the movie Lara Croft: Tomb raider and the temple is now often referred to as the “tomb raider temple”. The site has remained untouched and part of it’s beauty is how nature has become intertwined with the structure and co-existing for centuries. Angkor Wat is protected by UNESCO as a world heritage site. Visiting Angkor Wat is a truly stunning and spiritual experience. 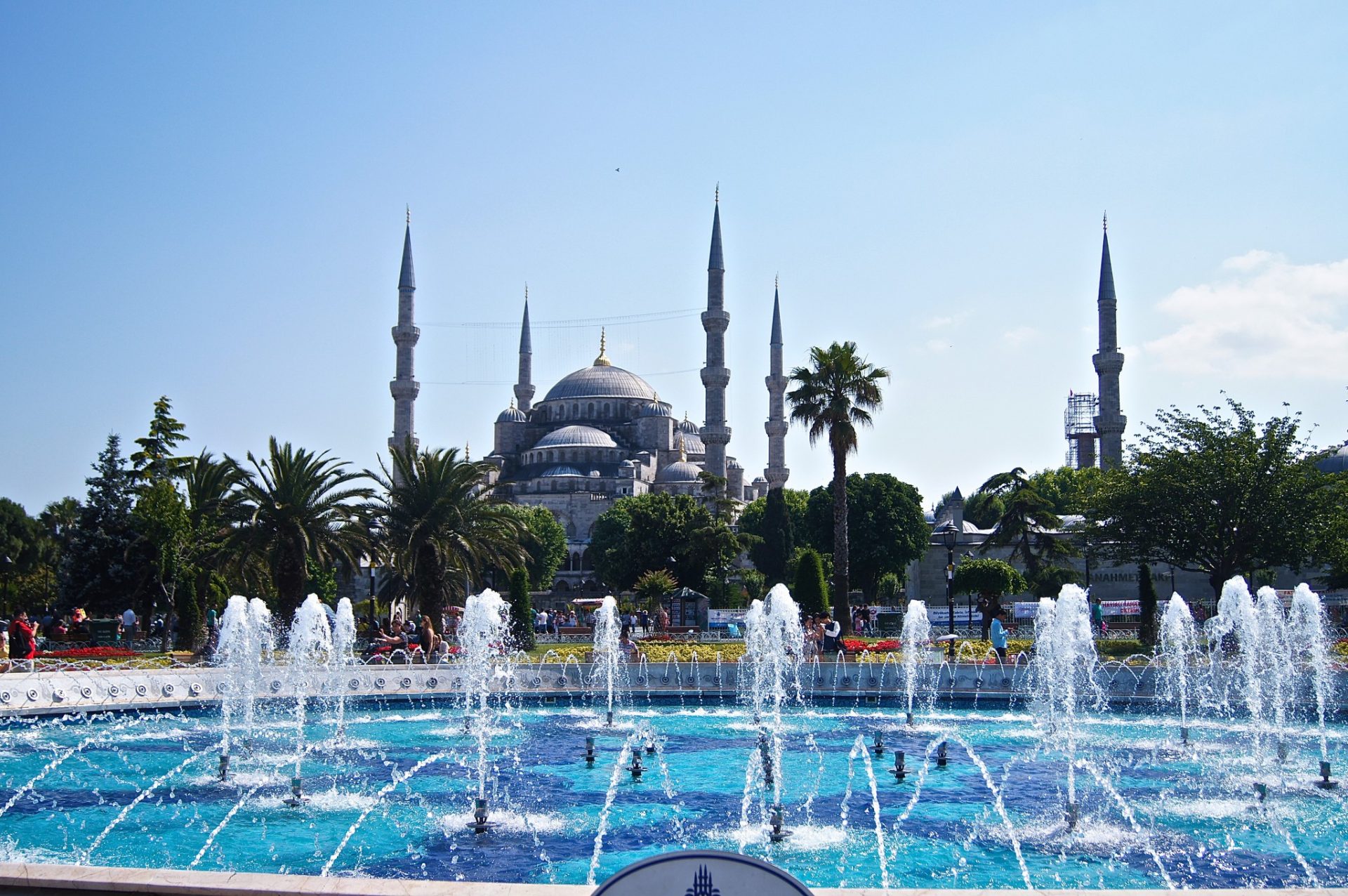 The Top 15 Places To See in Istanbul