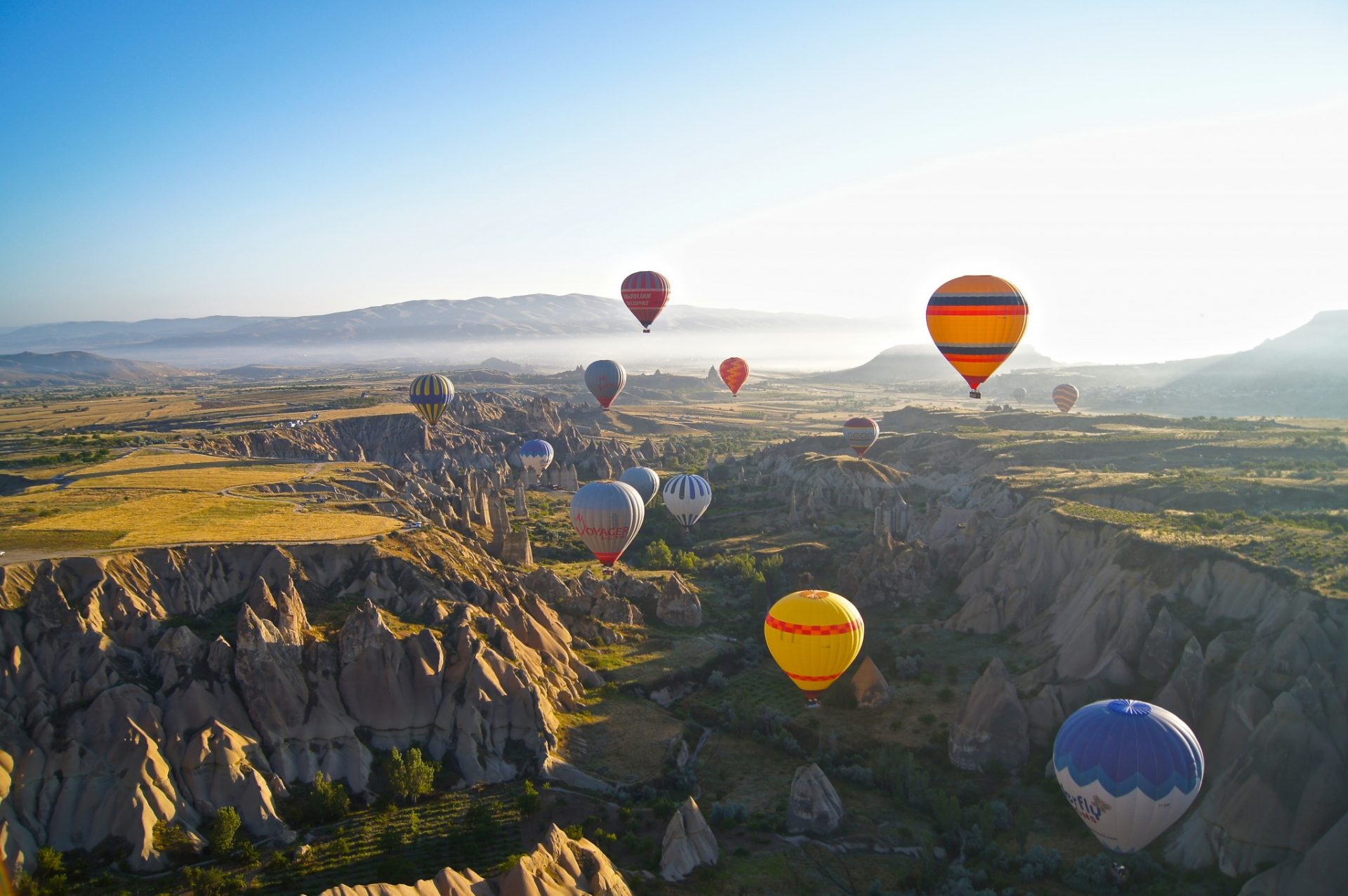 Taking a hot air balloon ride in Turkey is one of those spectacular experiences that should not be missed if you have the opportunity to visit Turkey. It’s an incredible experience that will have you floating over the unique landscape of Goreme, a place where you could be forgiven for thinking you landed on another planet. Goreme’s landscape is made up of incredible rock formations referred to as the fairy chimneys, along with stunning valleys and the backdrop of the mountains in the distance. Then there is the chance to witness a magnificent sunrise as it peaks into view and bathes the landscape with a warm orange glow. It’s one of the most incredible things I have ever done and the picturesque location is just surreal. If you are ever in Turkey then get yourself on a plane to Cappadocia and experience hot air ballooning in Turkey for yourself.

The area of Cappadocia has become synonymous with balloon rides with many companies operating in the region for a very lucrative tourist market. Finding the right company might prove a challenge for many and if you are with a tour group you may just go along with their recommendations. Fortunately for me, I was booked with the company Urgup Balloons through Road Runner Travel and was very pleased with the professionalism of this company.

Urgup balloons have been operating since 1997 and at Cappadocia since 2007 with an overall experience in the industry for 18 years. The Urgup balloons are made in the United Kingdom by the prestigious Lindstrand Balloons. The pilots are experts in their field and speak both Turkish and English and the company is fully insured. One point of difference with this company is that they have different departure points all dependent on wind conditions. Most companies will take off at the same place each day, Urgup Balloons assess wind conditions and will plan their take off sites accordingly. The wind can be unpredictable and many flights are cancelled due to this factor. You will be given a refund if your balloon flight is cancelled.

As hot air ballooning is done at sunrise, I had arranged to be in Goreme the day before my balloon ride was scheduled. On the day that I arrived I was part of an organised tour group that had us touring the whole day in South Cappadocia. This was great as I was getting to see at ground level where I would be ballooning over the next morning.

My balloon ride was booked for 5 a.m the next morning in order to witness the sunrise. I’m not really a morning person but this is every bit worth the early start of 4 a.m. I was picked up from my hotel by Urgup Balloons in a minibus with other tourists at 4.30 a.m and then transferred to the meeting point. Once at Urgup Balloons, I was allocated to a particular balloon group and was then asked to enter my details into one of the computers provided throughout the room. Once you have done this you can have something to eat, as they provide some breakfast in the form of tea, coffee and some sweet cakes and biscuits. At this point, you might notice that it isn’t too warm at that time of the morning and you perhaps realise that it will be even cooler once up in the air. If you didn’t dress warm enough, then fear not there was the option of buying some warm fleece jumpers, beanies and gloves amongst other souvenirs at the meeting place. Once everyone was entered on the computer it was time to head to the mini van again and then off to the site where all the balloons were to taking off. There was around 10-15 minutes of waiting whilst the balloons were all being fired up and inflated. It’s quite exciting watching this process unfold with so many balloons inflating all around. At this point the official photographer will organise a group photo and then once you are on board the balloon a further photo will be taken. The balloons are licensed to carry 20 people maximum and in my group there was 14 people. Each of us were then instructed on how to get into the balloon (you have to climb up the basket). The balloon has four separate compartments, which holds five people in each. In the compartment I was in, there was just myself and two other girls so it was quite roomy. As the balloon was being inflated we were given a run down on the safety procedure by the pilot and then we had to practice an emergency landing position. Once the formalities were done, all that was left to do was wait for lift off.

When we first began moving upwards, I didn’t even notice that we had left the ground, it was that smooth. The balloon ride is very gentle and you don’t even feel any movement whilst floating up, down, side ways or any ways. It was fairly quiet apart from every now and then the balloon pilot would fire up the gas to our balloon making a loud noise. The pilot would point out or explain the areas we were flying over, taking us high up, down into valleys and over the little village of Goreme. Balloons beginning to take off over Goreme. Most of us were all snapping away with our camera’s constantly trying to capture the moment! You do get caught up with it all, kind of having the feeling “is this really happening” and wanting to make sure you captured this memory on film. I did start to feel that I needed to put my camera down and just be in the moment which I did for most part. The amazing sunrise over Goreme and the valleys in Cappadocia. The scenery is just incredible to float over – you are gliding into crevices, getting right into the valleys and then floating high up again. The sunrise is just incredible as it begins to appear over the mountains with it’s warm amber glow. My balloon ride was to last about an hour, but it actually went a little longer than that and all up the from start to finish you will have spent a good part of 3 hours with this experience. Now this was a great photo opportunity! I did feel that our pilot set this one up perfectly for us and I didn’t miss the opportunity to capture our shadow. After what seemed like hours, it was time to land this balloon. We were then expertly guided onto the awaiting trailer without too much of a bump. We were all then helped or lifted out of the balloon by the awaiting men. There was plenty of laughs as we all fell into those waiting arms and lowered to the ground. Once on the ground it was time for a little champagne ceremony and the presentation of our certificates to say that we had participated in a Hot Air Balloon Flight in Cappadocia, Turkey. We could then purchase the photos that were taken before the flight that were already printed too. It cost me $10 for the two photos.

We were then transported back to our hotels around 7.30 a.m.

A standard balloon ride will cost 130 Euro for 1 hour. Included in the price was a light breakfast, a champagne toast at the end of the ride and a participation certificate.

The professional photos taken at the beginning were an extra cost but at $10 Australian dollars for 2 photos, this was very reasonable.

The Cappadocia region is located in the centre of Turkey and is quickly accessible by plane. A 1 hour plane flight from Istanbul will have you landing at the Kapadokya Hava Limani Airport. You may need to organise transport to meet you at the airport or check if your hotel offers transfers. I flew into Cappadocia with Turkish Airlines. 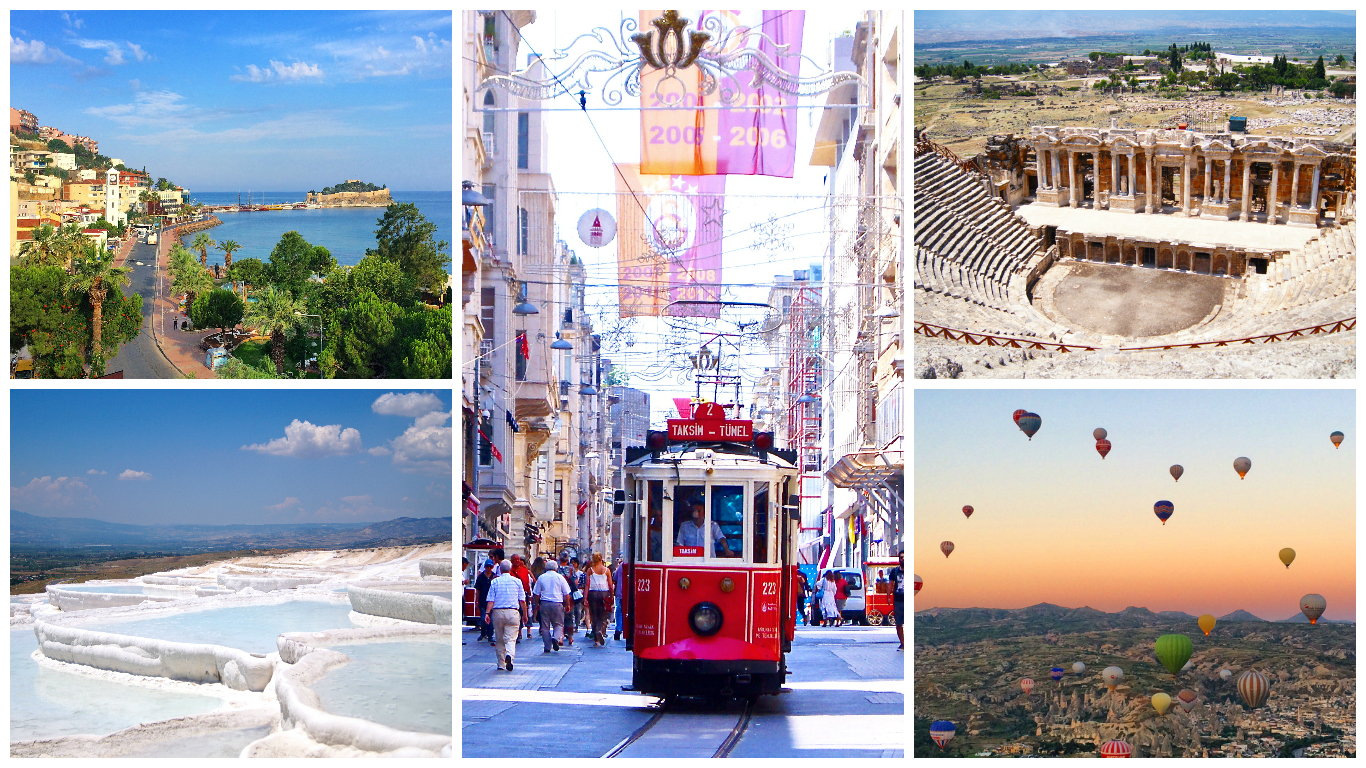