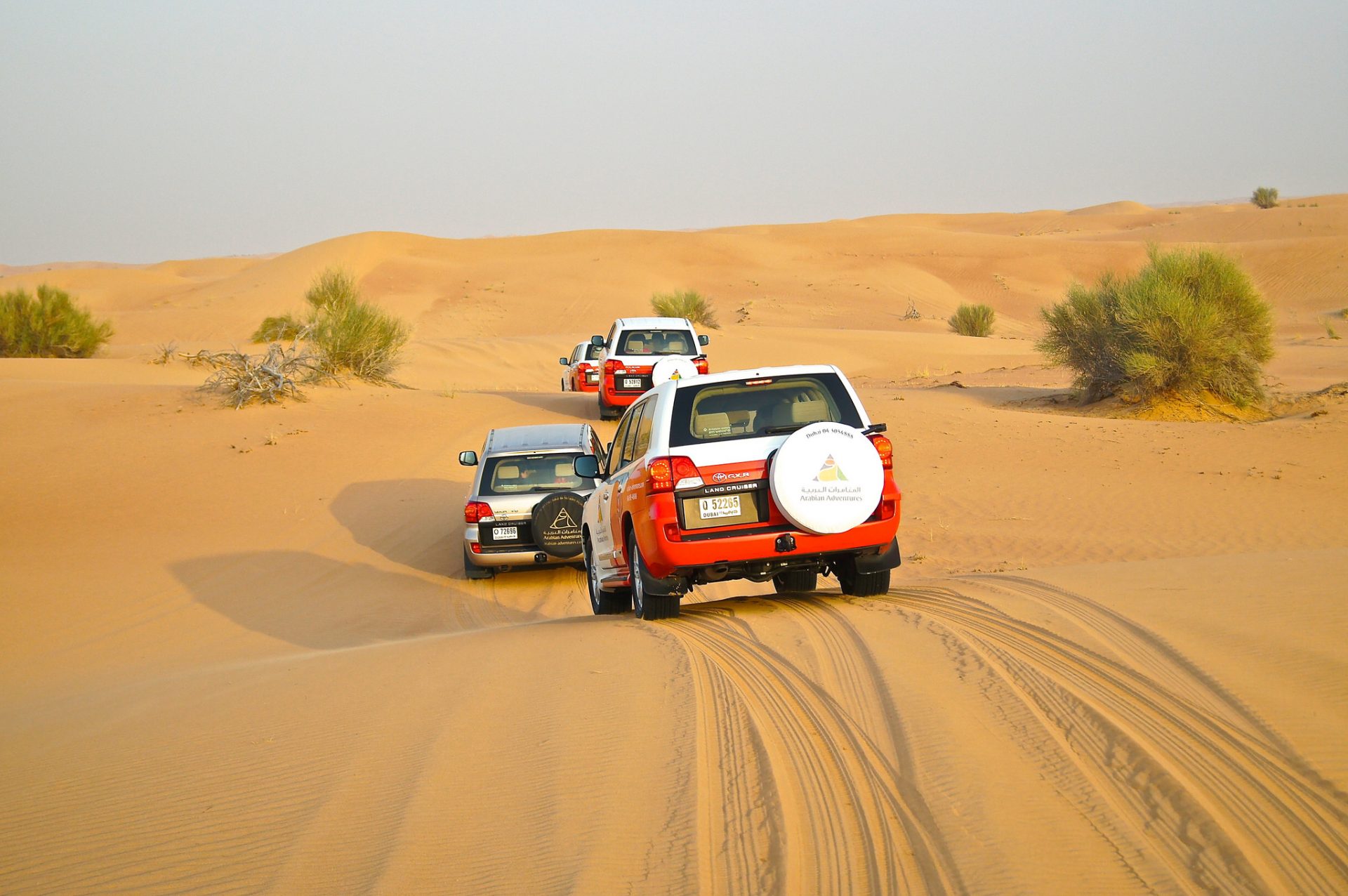 One of the most popular tourist attractions or rather things to do in the UAE is a Desert Safari and Dune Bashing in Dubai. I was recommended a company called Arabian Adventures by a friend, checked out the reviews and decided to book. I loved this tour from start to finish and I if I could – I’d give this Arabian desert encounter an 11 out of 10. What this tour will bestow on you is a thrilling adventure ride through the desert, an opportunity to witness a glorious Arabian sunset and a highly entertaining evening in a bedouin-style camp. This cultural evening is something not to be missed when visiting Dubai. I booked the Sundowner tour with Arabian Adventures (part of the Emirates group) which currently costs AED 360 per person (approx $136 Aus). The online booking process was simple. I picked a date, nominated my hotel pickup and then printed off my reservation.

I was then advised via email what time I was to be waiting out the front of my hotel, which in my case was 4.30 p.m. I waited around 15 minutes before my driver arrived with the 4WD and to my relief, there were other people in the car to share this dune bashing experience with me. Now, I’ll admit to being a slight wimp (I only say slight because I have jumped out of a plane solo before!) and the minus side of being the last one in the car, was that I got relegated to the front seat. So I had the prime view of the windscreen and thus I would be the first to see what perils lie ahead once we hit those dunes. Fair to say I was little bit nervous and I hope I wasn’t going to embarrass myself by cowering behind the front dashboard on the first big dune. I had never been 4 wheel driving before, so I had no idea of what I was in for.

So, there I was in the front seat, the family of five in the seats behind and our new friend the driver who was about to take us on this adventure through the Arabian Desert. At this point you start summing up your drivers capabilities as they are driving you along the highway. A few subtle questions later and it transpired that our driver had being doing this for a few years now and indeed once on the dunes he proved a skilful driver.

The journey out to the desert takes around 50 minutes and along the way, our driver told us stories, answered questions and pointed out things of interest. We passed by many camels, the camel racing track and the Royal family’s properties. Our guide also told us that the property we were to enter for the dune bashing was owned by the Sheik and was some 90 km of land dedicated to conservation. In fact a portion of the fee goes toward conservation areas and indeed you will see wild life freely wandering about, if you keep your eye out. Our first stop was to let the air out of the tyres to enable the 4WD vehicle to plough through the sand dunes without sinking into the sand. Our driver then explained what to expect next and the general run of the evening.

We then drove to an area where we could have some refreshments (water and soft drink), a photo opportunity with the camels and then we were escorted to a seating area to watch the Falcon show. The falcon handler took us through the life of this predatory bird and what it is capable of.  The handler demonstrated it’s stunning flying techniques and how quickly it can spot food and obtain it within seconds. It was an interesting demonstration that lasted for around 30 minutes. The seating area for the falcon demonstration. Keep your eyes peeled for the wildlife wandering around the desert conservation area.

The tour continues with the main attraction – the desert safari and dune bashing. We locate our cars and I will add at this point, that it is a good idea to either memorise your car’s number plate or even better take a photo of it. There are around 30 cars that all look the same, so finding yours might prove to be a little confusing. Now at this point, my heart is beginning to quicken it’s pace at the thought of high speeds on sand dunes and my fellow passengers were all feeling a little apprehensive right along with me. We ease into the drive as it begins with a flat section and that was totally fine by me – remember I was right up there in front. Then suddenly the speeds begin to increase, some slick gear changes and then we are hitting up those sand dunes. The driver handles the dunes expertly and it really is thrilling, with every second of the way you will be wondering if you will make it up or even over those hills. Halfway through our drive, one of the occupants (teenage boy who was keen at the start) felt very sick and we had to pull over and stop for awhile. Then it was back to the dunes but more of a slowed down version, well as much as you can when you are going up and down dunes as you do need speed! The dunes might not look that big, but when you are sitting in the front seat getting a birds eye view of what’s coming up, it’s exciting and they are plenty big enough. It’s a game of follow the leader in the sand dunes. The dune bashing concludes with a stop to watch the sunset over the dunes. The sunset is truly magical as it descends down into the dunes in the distance. Don’t waste anytime getting photos as anyone who has ever watched the sun disappear into the horizon knows, it happens quickly. If you want to capture a sunset without other people in it, then once again be quick. As people will start running up and own those dunes and they will end up being the unwanted attraction in your sunset photo. The photos I took below may look as though I’m alone in the desert but right beside me are at least 100 other tourists taking photos. If you are alone, the drivers are more than happy to take a few snaps for you. Once the sun has completely disappeared and you have spent about 30 minutes taking photos, it’s time to leave again and get ready for the big feast. Once the 4WD dune safari is finished we travelled back to the original starting point, where the driver went through the process of re-inflating our tyres before heading off to the feast. Whilst we were driving, we were told what to expect once at the bedouin style camp and our driver suggested that instead of getting a camel ride or the other activities on offer, that we head straight for the tables and get a good spot close to where the show will be held. Then later when it isn’t so busy we could wander about the activities. I got a front table close to the action. Most people just left their shoes on the cushions to denote that the table/seat was taken. The bedouin style camp was well set out. There was a big cushioned area in the middle for shisha, beside that was the stage where the male dancer was to perform and then there were the tables that surrounded these areas. Around the perimeter was the food stations, which was set up in three different areas (all serving the same items) and one area for drinks. Water, soft-drink, beer and wine was available.

The food was a plenty, beginning with a selection of starters of typical Arabian cuisine. You could have as much as you liked, as for myself I was a little conservative on the serving sizes. Mains were also plentiful, with lot’s of variety. I was a little full from the entree so I didn’t load my plate up too much as you can see! The food was actually quite good but you can’t really go wrong with a bbq style dinner.

Once everyone had their main meals, the entertainment began. I will add at this point that my visit here coincided with the holy month of Ramadan. There was one change to the feast format and that was, rather than having a female belly dancer, we were to be entertained by a male dancer. This was a real highlight and after witnessing the amazing talent of this dancer, any regret at not seeing the belly dancers was gone. The dancer performed an amazing spinning dance with an outfit that was lit up with lights, it was incredible to watch. The next performance the dancer made use of both his outfit and a massive giant hat-like prop that he expertly spun around, even involving the crowd with the dance. Both dances were thoroughly entertaining. The male dancer with the oversized spinning hat. A dancing, spinning and juggling act. Other activities you could participate in at the camp were the camel rides, which took place just outside the camp entrance and ran for most of the night. The ride was a quick few minutes within a small area. You could have some professional photos taken or the camel handlers offered to take a photo with your own camera. There was also henna hand painting stations and in the middle was the shisha den. All these activities were inclusive. The evening concludes with some ‘star gazing’ in the Arabian desert. All the lights are turned off and the camp is in total darkness. Guests are asked to lay down on the mats and gaze at the stars for around 5 minutes. It’s quite a relaxing experience and mostly people are quiet, with the odd person whispering or laughing at the total silence – but that’s people for you!

All in all, for me it was a fantastic experience and something that you should not miss out on when visiting Dubai. Even if you are just on a days stopover, this will certainly make your visit to Dubai memorable.

This desert safari and Dune bashing in Dubai experience is run by Arabian Adventures.

A Day with Bali Traditional Tours