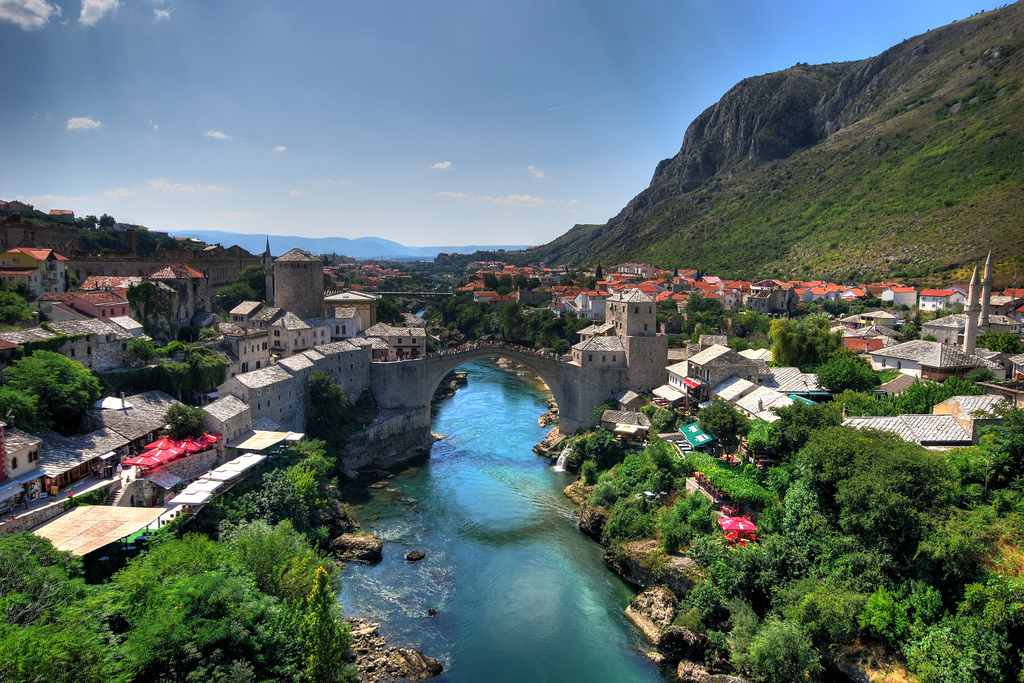 A little while back I took a day trip to Mostar. I had wanted to visit Mostar for quite sometime and being so close in Croatia, I thought it’s a now or never time to tick this off my bucket list.

Mostar is a little picturesque town in Bosnia and Herzegovina. The old town centre gives you an idea of what Mostar would have been like centuries ago. At the heart of the old town is the main tourist attraction – a single arched stone bridge, called ‘Stari Most’. This historic bridge is the subject of many beautiful photographs, paintings and a platform for an age old diving tradition by the Mostar locals. Upon arriving at Mostar, you will no doubt head in the direction of the old town and what you will find is this picturesque village like scene. Cobblestone Streets and old buildings flank either side of the Neretva River. Each side is connected by the well known bridge, Stari Most. As you wander into the village, you will make your way through the market, which will lead you to the centre of town and the bridge. The bridge has a great vantage point to survey the river and the town itself. Locals and tourists lapping up the sunshine and a prime position for watching the locals jump from the bridge into the waters below. Whilst you are visiting Mostar in the summer months, you will no doubt at some point come across these locals who will jump from the bridge into the cold waters below. Once these locals raise ‘enough’ money in their cap (usually around 20 euro) they will jump. It’s really quite an exciting thing to watch and the cheers from the crowds make for such a great atmosphere. The bridge jumping is an old tradition dating back to the 1600s, it is only performed by locals as it is quite dangerous. The river is deeper than it looks. There is an opportunity for tourists to be able to perform a jump, but only after comprehensive training. Cafes and restaurants have a fantastic outlook over the river, the bridge and old buildings. Many of the restaurant terraces are shaded and make for a relaxed place to sit with a nice meal and a vino or two. The old town is set up with market stalls lining the cobblestone streets and it’s a wonderful place to wander about. Shopping is mainly for the tourists but there are plenty of interesting things to look at or perhaps find that unique memento to take home. During the conflict of the 1990s, part of the old town was destroyed. Some buildings still bare the reminders of war, riddled with bullet holes or destruction. The bridge was completely destroyed in 1993 leaving either side of the river isolated. Thankfully this beautiful town and bridge was restored in 2004 to it’s former glory with the help from UNESCO and funded by several countries. The bridge is an exact replica, using what was salvageable of the original material. It is now listed as a world heritage site.

Buildings left as they were after the conflict serve as a reminder of the ravages of war. And finally, the perfect spot to get a photograph of yourself and the famous bridge at Mostar. I based myself in Dubrovnik, Croatia and a day trip to Mostar is easily done. To take the hassle out of getting to Mostar and the two border crossing checks, I decided to go with an organised tour. Most tours from Dubrovnik will be around 10-11 hours in duration. This gives you plenty of time to not only have a guided tour, but a few hours to spend wandering around Mostar on your own.