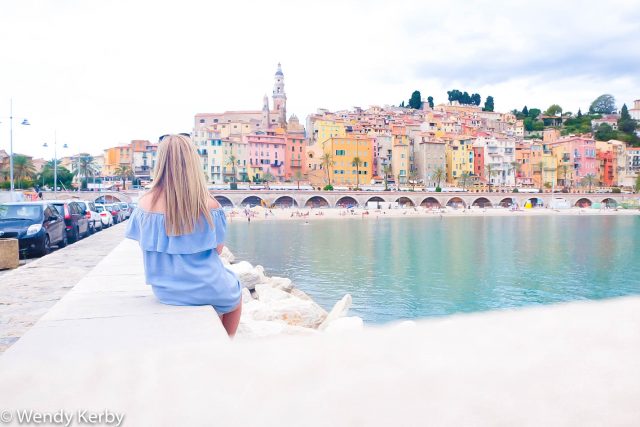 The French Riviera is a beautiful stretch of coast that is situated in the south of France. There are plenty of beach towns stretching from Saint Tropez to the Italian border. It’s right on this border that you will find the colourful Menton. Whilst most people are visiting the larger tourist towns such as Nice, Cannes and Saint Tropez, they often miss these lesser known smaller towns.

Menton is a peaceful little town that has a population of 29,000, a charming little old town centre and some beautiful beaches. Menton enjoys some beautiful weather all year round too, with mild winters and warm summer days. Menton is an easy 30 minute train ride from Nice and a little gem that you simply cannot miss.

What to see and do in Menton

One of the most picturesque part of Menton, is the impressive harbour area and it’s colourful old city in the background. Take a walk along the Quai Imperatrice Eugenie to capture some great shots of the city, admire the boats or walk along the sandy beach.

The old town is as the old town was. It’s great to see that it has not been overly developed and retains that yesteryear charm. With beautiful colourful buildings, peaceful laneways and little piazzas, you’ll possibly want to stay more than a day. Leading into old town is Rue Saint Michel, a long street lined with little shops and cafes.

On your walk through the old town, you will eventually find yourself heading up the hill towards the Basilica Saint Michel. The churches bell tower soars high above the town, so it’s easy to find which direction to walk in. The square in which it is located is paved with black and white pebbles from the beach below. The square looks out to the harbour where you can enjoy some lovely views. If you happen to be there on a Saturday, you might get to enjoy watching a wedding celebration as they gather in the square in front of the church. Set high up on the hill is the Menton Cemetery or as it’s known the old Chateau Cemetery. It has some impressive views out to the Menton Harbour and and some equally impressive tombs. During the 19th and 20th century, aristocratic families flocked to the area and built elaborate homes and indeed this can be also seen in their final resting place. Interestingly, there are many English buried at the cemetery with the most notable (if you are a rugby fan) is the grave of William Webb-Ellis, the inventor of rugby.

Just a short walk away from the harbour is the promenade du Soleil where you will find another beach along the coastline. There are plenty of cafes lining the beach, making it a perfect spot for lunch or afternoon drinks in the sun. Marche des Halles is located between the beach and old town. It’s an old covered market housed inside the Belle Epoche building that was built in 1898. It’s not a huge market, it has around 30 stalls and sells local food produce.

The easiest option from any of the coastal towns is to go by train. Simply buy your ticket at the ticket machine and away you go. There are two stops in Menton, make sure you get off at the first stop (Menton) and then head in the direction to the beach. It’s a 15 minute walk to the actual harbour but on the way you will walk past the beach cafes that line the beach.

Where to shop in Paris