There is that old gem of a saying that “when in Rome … do as the Romans do” and when I visited Rome I most certainly did just that: I embraced the Italian culture with open arms and a gelati in each hand! Walking around Rome is like walking around an open air museum, where every turn there is some archaeological site right in front of your eyes or magnificent ancient buildings with amazing architecture and furthermore – they have the Colosseum! When I first laid eyes on the Colosseum I was awestruck and upon entering the building I nearly had to pinch myself as to whether I was really there! I think Rome just has that affect on you. Then there is the Rome that is all about sitting in beautiful piazzas with impressive fountains, alfresco dining, drinking coffee and tasting every flavour of gelati under the sun! Yes it’s fair to say that I pretty much fell in love with Rome!

Go for the fascinating history, the culture, the beautiful Italian food, the shopping, the friendly people, the language, coffee and of course the gelati!

The major tourists sites are easily explored on foot and can be done in three days if you are limited on time.

You can’t go to Rome without seeing the impressive Colosseum. The amphitheatre was built in 80 A.D. in the centre of Rome and inaugurated by Emperor Titus in a -100- day -long festival. In it’s hey day it could hold around 50,000 spectators who came to watch the gladiator games or theatre dramas held there. It’s such a surreal experience to be standing inside the Colosseum and you could almost feel the crowds of ancient Rome as you wander about. If the walls could talk then you could only imagine what they would have to say.

The Trevi fountain is a magnificent site to behold and if you have never visited the Trevi fountain then you will be surprised at the grand scale of the sculpture some 26 metres high. It is very crowded and busy with lot’s of tourists taking photos or just sitting by the fountain. Don’t forget to toss a single coin over your shoulder into the fountain, as according to the Italians this means you will most definitely come back to visit Rome again.

The Spanish steps are a vibrant and elegant square where long ago it was the gathering place for the wealthy, the beautiful and the bohemians. It’s a great place to just hang out and people watch! Depending on the weather there are usually lot’s of people sitting on the steps but in the height of summer most will be sitting around the fountain at the bottom. Once you have climbed to the top you will encounter a church, an area of artists and a view over the Rome rooftops.

The well kept piazza is the most famous in Rome and is a wonderful place to relax and watch the day go by. Here you will be entertained by the artists that paint here, the three large fountains that sit in the middle and the hive of activity of people wandering about. The cafes and restaurants in this area are very expensive as you pay a premium for being “seen” in the piazza. But as they say … when in Rome … and what better way to spend the evening than to dine in the charming Piazza Navona.

Vatican City is an awe inspiring and a little overwhelming. The excessive wealth of the Roman church is displayed everywhere from the artworks of Michelangelo on ceilings to the impressive buildings in itself.  St Peters Basilica is large and ornate and offers panoramic views from the dome which is accessed by climbing more than 300 steps. The Sistine Chapel has many artworks that adorn the walls and ceilings many gilded in gold. You could easily spend a whole day wandering about if you didn’t have to contend with the crowds.

The Pantheon is an amazingly preserved building that was built between 118 A.D and 125 A.D. It’s famous for it’s great and still intact dome. The domed roof has a circular opening (called the oculus) that allows natural light to stream into the building. Visiting on a rainy day is interesting when the rain comes through the opening. To get a sense of the enormity of this temple just stand next to the entrance door and the pillars at the front you will feel very small in comparison!

If you have more time then check these place out too – many of which you will pass by on the way to the above tourist attractions.

There are so many more things to see and do in Rome and really at every turn there is something to discover. A truly amazing ancient city that you must see at least once in your life!

Rome is a fairly safe city and there is good police presence. I found that getting around at night I felt quite safe, especially in summer when there is a  high amount of tourists around. As with any city you visit always be cautious with your safety. 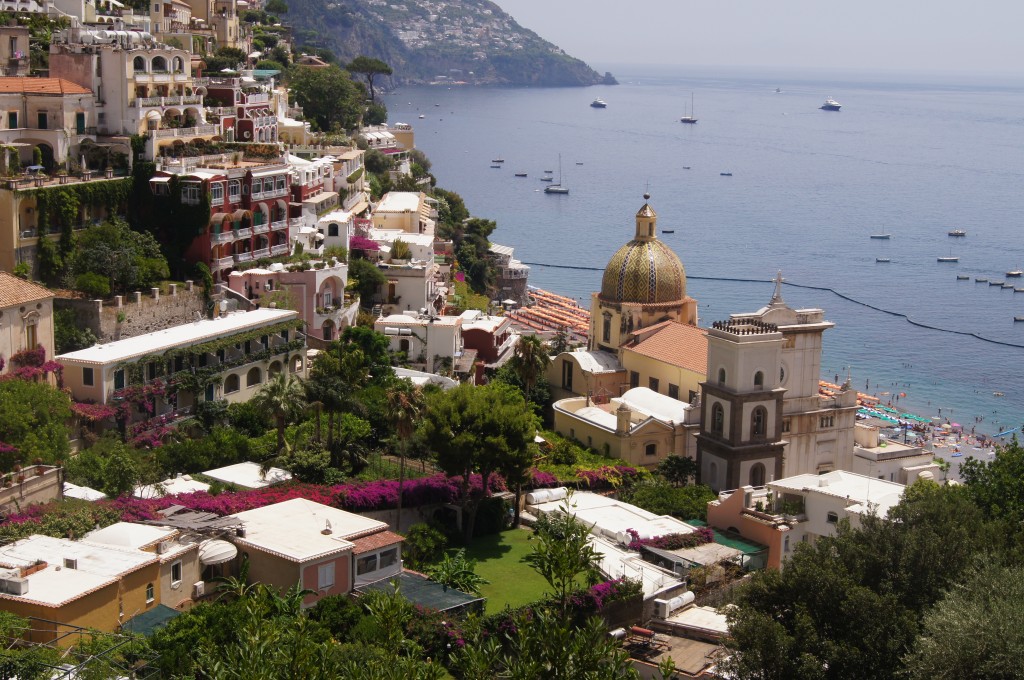 Falling in love with the Amalfi Coast